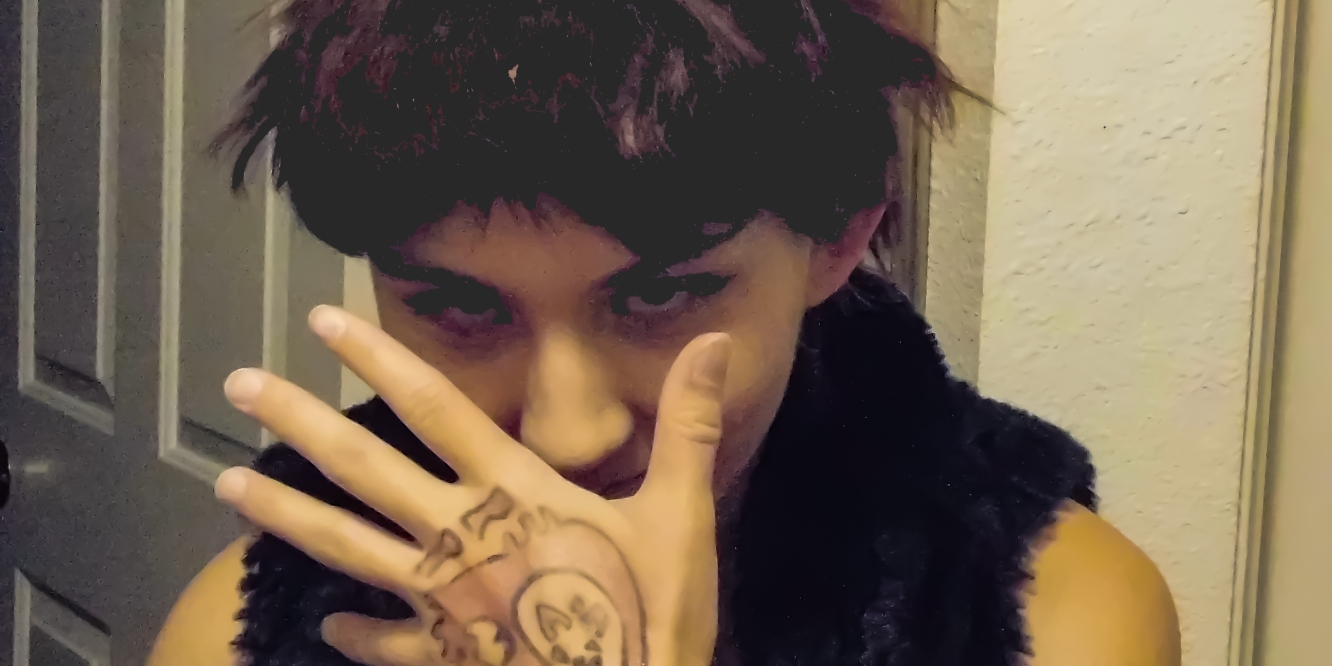 You let out a tired sigh as you finish wiping down the old, bar counter. Even after years of use, you could make the old thing shine like new with a little bit of elbow grease. You smile at your handy work, only to flinch in pain at the twinge in your lower backside. And as if on cue you felt a presence behind you followed by a pair of hands massaging away the all of the kinks.

A relived sigh passes your lips followed by a bemused chuckle. “You know, you don’t have to do this every time you see that me or the others are in pain you know. Me especially.”

A snicker came from the person behind you and those hands that were at work on your back, were now pulling you back into a pair of strong arms and a wall of muscle. “That’s nonsense Kitten, I have to make sure all of my possessions are in top shape. Not bending over in pain.”

You shake your head and turn your body around to face the speaker. Your eyes trail up and down his figure, taking in the egotistical, arrogant, but devilishly handsome man that you’ve come to known as your boss. “What have I said Greed, I may be an employee, but I’m not an object,” you smirk as your eyes look into his purple ones.

He merely chuckles as he releases you from his hold, ruffling your hair as he passes. “And what have I said Kitten?” he repeats back mockingly, as he leans back on the bar, his back facing you.

Rolling your eyes, you take a clean shot glass from the cupboard, fill it, and walk around the bar to put it into Greed’s awaiting hands. “Do tell, boss. What are the wise words that you wish to thrust upon me?” you say with a smirk that nearly matches his own.

He lets out a bark of laughter and places the now empty shot glass on the bar behind him. He then fixes you a look that tells you that one of two things will most likely happen. Someone is going to get their ass handed to them—possibly you, or he’s going to say something that will mostly likely get him punched—also, usually by you.

You let out an exasperated breath, but the grin that plays at your lips betrays your amusement. This again? Really? “You,” you say after a moment.

Greed raises an eyebrow. “You? Not sure who your referring to Kitten.”

He’s really something isn’t he? You put your hands on your hips and shook your head. “You, Greed. I work for you.”

He grins showing those shark like grin of his. “Yep, that’s right. You work for me,” he says as starts to take slow measured steps toward you, in turn making you take several steps backwards until you bump up against a nearby table. “And you know what that means?” he presses, caging you between him and the table much to your chagrin and slight pleasure—not that you’d ever admit it. You wouldn’t hear the end of it for days.

“What Greed? What does being an employee of yours mean?” you challenge. You saw the way his eyes flashed at what you said. You were pushing it, but it was just too tempting to not push his buttons every now and then.

He leans down and just to make his point he spoke directly into your ear, as if the close proximity wasn’t enough. “It means you’re mine Kitten. All of you are. So that means if I see one of ya in pain, you should be sure as hell, whether its caused by some idiot or somethin’ superficial, I’m going to put a stop to it. No one messes with what’s mine.”

He then pulls away as if nothing ever happened, leaving you ever-so-slightly red-faced. “Well, I’ve got some business that needs to be attended to, look after the bar while I’m gone, if someone messes with ya, give ‘em hell but make sure to save some ass kicking for me,” he says with a wink as he heads down to the lower levels of the Devils Nest.

You let out a breath you didn’t realize you were holding as you watch his retreating form. Pulling yourself upright once more you shake your head. “He’s such a tease,” you mutter. Turning back towards the bar, you see Dolcetto and Martel smirking at you.

“It’s you, (y/n). It’s amazing how you can be so obvious, yet so oblivious at the same time,” Martel finishes for him.

Oblivious? Obvious? There is no way! “And how do you suppose that guys?” you balk.

Dolcetto props himself up onto the bar and swings his feet back and forth as he smirks down at you.  “Well let’s see,” he starts. “Who does Greed tease mercilessly?”

You raised an eyebrow and cross your arms over your chest. “Uh, that would be me.”

He nods. “Yep, and who is fiercely protective of him?”

Shaking her head, Martel puts a hand on your shoulder. “Not as much as us though, (y/n). We’ll beat ‘em up good, but you, you tear ‘em to shreds.”

“I owe him a debt for saving my sorry arse outta the hell hole I came from, of course I’m protective,” you defend.

“We all have our demons that the boss helped chase away (y/n). But out of all of us, you’re the one who’s in love with him,” a deep voice said behind you.

You sigh and look over your shoulder. “Not you too Roa! And I’m not in love with him.”

Hearing your three friends chuckle in response to your indignation just frustrates you more. “I’m not! I just admire him! That’s all.”

“We’ve known ya since you came here after the war, I think we can tell when you’re in love. Especially when it’s with the boss.”

Letting out a huff, your boots scuff against the floor as you march over to the bar to grab your forgotten cleaning cloth that now laid haphazardly in Dolcetto’s lap. “Gimme that,” you growl.

Dolcetto gives you a sympathetic smile as you snatch the cloth away and march over to a recently abandoned table. “Look, (y/n), we’re not trying to tease you—”

“Could’ve fooled me,” you grumble as you scrub at the table.

“We’re not,” Martel pipes in. “We’re just sick of you pinning after the boss and not doing a damn thing about it. You don’t even realize that he feels the same.”

Pausing in your work, you look over at the trio. “Look. Guys. I appreciate what you’re trying to do, but no. I’m not in love with him, and there’s no way in hell that Greed would be in love with me.” You put down the rag and turn to them.

“After the war, I put up a lot of walls—hell, we all have. And I highly doubt Greed will be the guy to finally bring them down.”

“Wouldn’t you want to give it a chance though?” Martel asks.

You shake your head. “Not really, no guy is worth that type of aggravation.” A yawn escapes your lips as you stretch your hands above your head. “Now if you guys excuse me, I’m going to take a nap.” You brush past them and head upstairs but not before throwing a look back at where Greed disappeared to. “Me in love? Hah, yea sure, like I’d admit something like that.”

Smoke and the scent of blood filled the air, all around laid piles of the dead. Or what was left of them. You heaved a sigh and looked up at the sky. “That should do it for this sector. Man, they really blew this place up, didn’t they? Tch. Figures. I knew that Kimbley was trigger happy.”

Letting out another sigh you continued on forward, your silver compass—the ball and chain as you liked to call it—clinked against your hip with each step. You were about to continue on to the next district, until you hear a moan and scuffle from the alley nearby. Curiosity peaked, you find yourself walking towards the noise only to be stopped dead in your tracks by what you saw.

There in the alley, lied a figure huddled into a fetal position, rocking back and forth, beaten and bloody. But that wasn’t the most disturbing thing here, it was when the figure turned to you, caked in blood was an exact copy of you.

Stepping back with a gasp, you cover your mouth in surprise. “What the hell?”

“This is all your fault,” it croaked.

The form crawled towards you and lifted its head slightly. “You caused this! Their blood is on your hands!”

Instinctively, you raise your hands to up to examine them, and to your horror blood was indeed on your hands. It was wet and slick as it ran all the way down to your fore arms. “No,” you mutter.

You bolt upright in your bed, panting and in a cold sweat. Just a dream, you think. It was only a dream. You take a couple deep breaths as you try to calm your erratic heartbeat. Looking down at your hands, you find that your hands are perfectly clean—not a spot of blood on them. You let out a relived sigh. “Thank god, only a dream.”

A couple quick raps at your door make you jump slightly, but catch your attention. You turn your head towards door and your lips curl into a small smile. “Hey Greed.”

He smiles back, but then a look of concern flits across his face. “Hey Kitten, I heard your screams. Another nightmare?”

You look down at your hands and nod. “Sadly, yes.”

He gives a “Hmm.” In reply and then, without any warning, walks over to your bed and lays down next to you pulling you into him.

“Hey! What gives? What in the world are you doing boss?” you question, squirming slightly in his hold.

He wraps an arm around you bring you closer which effectively stops your squirming. “Go back to sleep (y/n).”

“Not buts Kitten. I told ya, whether it’s someone beating on ya, or even a nightmare I’ll always be here to protect what’s mine. Now go to sleep.”

You let out a sigh, but listen to what Greed said and close your eyes. “Fine,” you say.

You hear Greed chuckle above you and you swear you could have felt the faintest of kisses on your neck before drifting off to sleep. “Good girl.”

Smiling softly as sleep over comes you, your left with one single thought.

At least out loud I won’t say it but, I love you Greed.