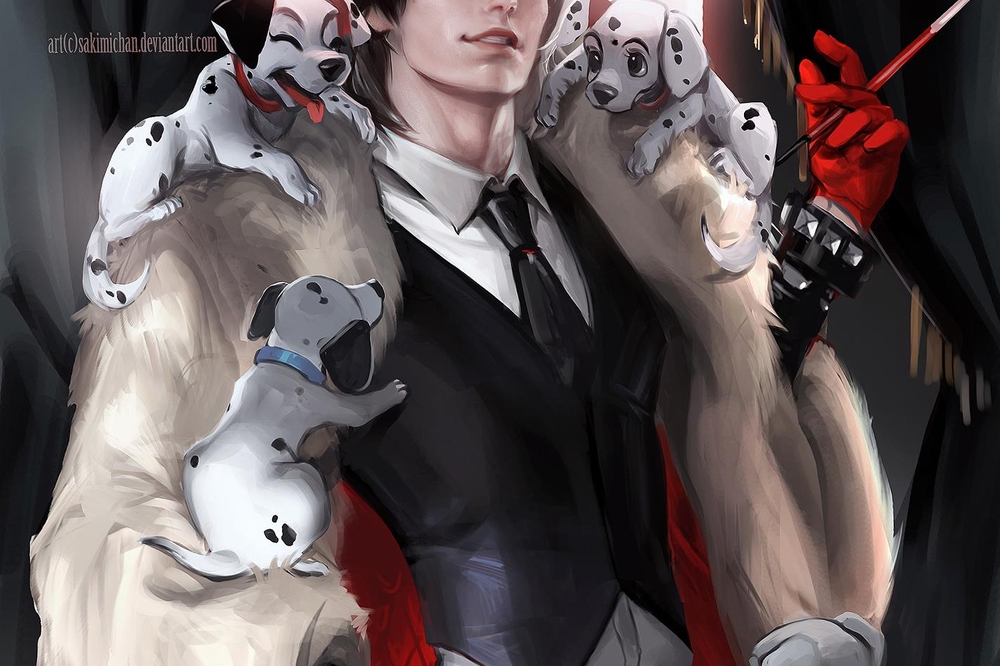 “That is it!” You screech, throwing down the piece of fur you were struggling to work with onto the worn-down worktable. You storm out of the workshop surprising a few of your fellow coworkers in the process.

You clench and unclench your fists as you stride through the striking black, white, and red marbled halls of House of De’Vil. Yup you, an aspiring costume designer had a job at the biggest fashion designer company in London. In all of England really. But that came at the price of working for the most agitating, bullheaded, indescribably egotistical, diva-like man in the entire universe. The one and only Cruello De-Vil.

You tap your boots in a rhythmic motion as you wish the glass elevator to reach the top floor faster. Your (F/c) skirt swishing back and forth with each tap. “He is finally going to get a piece of my mind. He has got to stop giving me these practically impossible designs to build! I’m a costume designer for god’s sake! I don’t build these overly extravagant useless fur coats!”

“Useless you say? Oh, darling I know that word didn’t just leave those pretty little lips of yours,” You hear a velvety yet, snake-like voice say as soon as the elevator dings open.

“Mr. De-Vil—You heard me?” You step back slightly taken aback at the fact that the man you were about to give a piece of your mind to is currently in front of you rather than his usual place in his office. And is throwing off your composure with a mere look from those icy blue eyes of his.

He clicks his tongue and takes a puff of that irritating cigarette he always carries with him. “How many times must I tell you to call me Cruello? And of course, I heard you, the whole building could hear your little tirade.” Then with a devious smirk pulling at his lips he motions you to follow him into his office.

You let out a sigh and follow ignoring the pitying glances thrown your way. Once you enter and close the door behind you, you stare up at the monochromatic-styled fashion mogul. From his infamous fur coat to his black and red suit pantsuit combo if he weren’t so infuriating, the man would probably be handsome. You couldn’t deny your attraction as much as you tried to hide it. But you refused to be another one of those silly women reduced to a panting mess at the mere sight of him.

“So, it appears my little bee has a problem with the assignment I’ve given her hm? I must say (Y/n) I thought you could anything.” Cruello says with a sneer.

You redden and you have to bite back a sharp remark that involves him shoving his assignments up where the sun doesn’t shine. But you want to keep your job, so you stay quiet.

Cruello raises a perfectly manicured eyebrow at you and walks towards you until he has you trapped between him and the wall behind you. “My, my nothing from my usually spunky (Y/n)?” He takes a long drag of smoke and lets it out in a perfect O. You want to brush it away from your face and cough so badly, but you hold back because heaven forbid you to do that. Cruello was known for his temper after all.

“I just have nothing to say that’s all sir.”

He leans in further and gets close enough that you’re practically nose to nose. You curse yourself for letting your eyes flit down to his lips and then back to his artic eyes a quick thought of a kiss swiping across your mind. This action, unfortunately for you, does not go unnoticed by Cruello.

He looks down at your own lips and for a minute you tense in anticipation thinking he’s actually going in for it. Wait what? No no no no! You can not have these thoughts about your boss. He’s infuriating and egotistical and all of these obscure designs that he has been making you make for him have been driving you up a wall. Yet, you can’t help the attraction that pulls magnetically every time you meet with him.

Cruello moves closer and just before your lips connect he side steps and moves to the shell of your ear. “Miss (Y/n), you can and will make that coat and bring it to my flat completely finished tonight no later than nine o’clock or mon fleur you will regret it.” He whispers and as he pulls away you could have sworn he placed a small, feather-light kiss on the underside of your jaw. But, it could have just been your imagination.

Cruello struts back to his desk as if he were a proud lion who just caught his dinner. “You are dismissed, darling. And remember nine o’clock. Don’t be late.” He says with a dismissive wave of his hand.

It takes a while for you to gather yourself and snap yourself out of the daze that viper put you in. But when you do, you finally have the strength to turn around and slam the door shut behind you but not before hearing a soft dark chuckle from the devil’s office.

“How the hell does he expect me to do this?!” You yell as you stare at the black and white fur in your sewing machine staring back at you as if it were mocking you.

“The viper gave you another impossible assignment again?” Jasmine, your best friend, and fellow costume designer said as she came into your part of the workshop.

You let out a tired sigh and fix the needle on your sewing machine for what felt like the umpteenth time. “Yea, pretty much. And this would be the third outrageous piece of clothing he’s made me make. From a sleek black and silver suit with blood-red cufflinks to a mermaid style, rather revealing and low-cut black and white dress with a red shawl and this—” you gesture to the half-done black and white fur coat sitting in your sewing machine. “Monochromatic fur coat.”

Jasmine just lets out a chuckle and you send her a cold look. She in return puts her hands up in defense and lets out another laugh. “I mean no offense girl, it’s just funny because you can’t see that he’s making you make both his and your outfits for the upcoming masquerade ball.”

You splutter. “What? There is no way! I mean sure the measurements are oddly close to mine, but that doesn’t mean anything! He has had me model a few of his designs before and act somewhat like a muse. So, this isn’t anything different, just more irritating and infuriating.”

“Uh-huh. You do realize you’re basically the only one in the whole costume department—hell, probably the whole building that he personally requests to do things for him. I mean for Christ’s sake (Y/n) if I had a dollar for every time I heard you being summoned over the comms I’d be rich.”

With a roll of your eyes, you just merely shrug off her comment and turn back to your work. Jasmine just shakes her head and gives you a bemused smile. “I’m just saying girl, the viper has caught his prey.” Then she turns and heads back out to her own workspace.

Once she’s gone you surprisingly manage to sew yet another piece together without breaking yet another needle “What she said is preposterous. He can’t possibly see me more than a simple designer to do his bidding. And I certainly don’t see him as more than my boss. Nope, not me.”

You didn’t know how wrong you were…