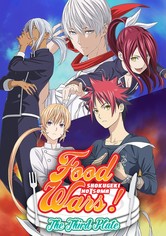 Hey everyone, welcome to this week’s Rebellious Reviews! This week will be on season three of Food Wars. I’ve been watching the whole thing again and I thought it would be cool to review one of my favorite seasons in the anime. A lot happens both in parts one and two and it just puts levels upon levels for the story. So, let’s get to reviewing this amazing anime season, shall we?

We are met with the usual cast from Souma and Megumi and the Polar Star Dormitory to the Aldini Brothers, Meat-Meat, and of course, Erina Nakari. And in this season, we finally get to meet the rest of the Council of Ten—seeing that we already know the seventh and tenth seat—Erina and Isshiki, but now we have the names of all of the other seats. And they are as followed:

Through the entire third season, both parts one and two—the train arc, were really good and we got to get to know most of the Ten pretty well. Especially my personal favorite, Kuga. There’s just something about his personality that makes him so entertaining and if I may say so myself, adorable.

We also get to know Alice Nakari, Ryo, and Akira a lot better. Especially with the Fall Festival. It was really entertaining to see the three of them work together. Their personalities are so different, yet they complement each other so well. And the shenanigans that happen with those three are very hilarious.

I’m glad we got to see more of them because it really fleshes out each of their characters a lot more. We get a better look at their personalities and how exactly they fit in the Food Wars world.

The food displays are on point as usual! They always look so amazingly delicious and that never ceases to amaze me how animes do that. Although, I wish in the train arc and when the Polar Star Dormitory was training we could have seen their actual training, rather than just flashbacks of it. It would have been a really nice extra thing to put in. But I digress.

What can I say, from the fall festival to the complete tornado that happens after? That was very well done. They spent just the right amount of time on each aspect so we can really get a feel for everything that is going on and feel like we’re along for the ride alongside the characters. Quite unlike what they did in the fifth season, but that’s a story for another time.

I especially loved the Fall Festival because not only did it bring about new characters, but it really helped us get to know the characters that were just shown to us in some episodes from the second season. For example, Alice, Mimasaka Suburu, and quite a few others. Plus, it honestly gave some really good character growth to our main group too!

So, what did y’all think? Do you guys agree with my consensus? What are yall’s thoughts? I’d love to hear them!

That’s all for now…

Wanna support Rebel Fae and get exclusive access to things such as work in progress posts and stories I don’t post here or anywhere else? Hop over to my Ko-fi page and donate. I’m eternally grateful for all that y’all do for me, you guys give me the strength to keep going so thank you from the bottom of my heart!